Начало > Tips for puppies > How to feed my puppy

HOW TO FEED YOUR PUPPY

A dog's health depends on several factors, and one of the most important is a balanced and appropriate diet for the lifestyle it has

Importance of a balanced diet

Dogs, like us, need healthy and quality food to grow and sustain the bodily functions that will develop throughout the day. Routine food is what best supports the dog's digestive system. In general, dogs does not tolerate changes to their diet, which means that if we continually vary what we feed our dog, the most likely cause is a digestive imbalance with flatulence and diarrhea and even cases of gastroenteritis. That is why it is highly advisable to choose the type of food that we are going to offer our dog and, if he tolerates it well, we try not to change the habit of always eating the same type of food.

It could be said that, in terms of dog food, feed is the most widespread food today and the one with the most variations. The great advantage of feed is that it is easy to acquire, it is very well preserved and stored, it does not stain and does not require any type of preparation. The most important thing when choosing a feed is to pay attention to its quality, which is given by the ingredients and the processing of the croquettes. A high quality feed is not cheap, and although you can find cheap feed in supermarkets, its ingredients are usually of such low quality that it is strongly inadvisable. High quality feed does not use flour, and has among its ingredients fresh meat or fish, it has no substitutes and cereals, and corn or soy are scarce in its ingredients

DOGS DO NOT EAT AS HUMANS DO

There are many differences when it comes to feeding dogs and humans, and we must be clear about this when it comes to offering food, as we cannot rely on our knowledge of feeding as a criterion to guarantee quality food to our dog. The human changes his diet in each of his meals without a problem, but if his digestive system were conceived like that of the dog, this permanent nutritional variation would produce constant diarrhea.

Dogs do not tolerate feeding changes well, which is why it is important that their feeding routines are not abruptly changed under any circumstances or we will cause the dog severe eating disorders with vomiting and diarrhea. The digestive system of humans represents 10% of its body weight, while the dog is only between 2.7% and 7% (depending on size), which explains why it is easier for humans to digest more varied elements.

We should always avoid giving our food to dogs and limit to offering their own feed or some good quality dog treat, occasionally. If at any time we have the need to change the brand of feed to which it is accustomed, we must make a progressive change. For a week we will be introducing an increasing portion of the new feed every day until the percentage of the new feed is total.

Another of the great differences between the diet between dogs and humans is that there are several ingredients that humans can eat and are beneficial for our body, while to a dog they are completely prohibited since they can even be fatal: 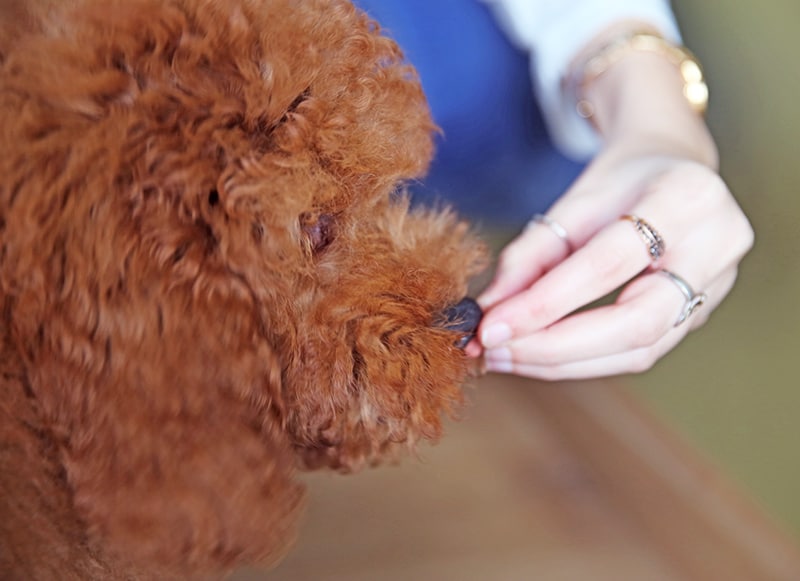 Puppies should eat 3 times a day the dose corresponding to their weight. As the dog grows, the amount of food it needs gradually increases. If there are doubts about how much the dose should be increased, we should consult the vet. If we see that the puppy with the recommended amounts is too thin or is gaining too much weight, the change of amounts should be consulted with the veterinarian.

It is very important to maintain a routine at meal times and to always eat at the same times and not leave the plate for more than 15 minutes (unless we see that you are eating after those 15 minutes and it is just slow). In this way we are teaching the puppy to eat at that time or it will not eat again until the next feeding. These guidelines are very important because if we allow you to have a plate full of food always available, the food becomes less attractive and we will also not be able to know how much you have eaten.

Unlike other breeds, the Australian Cobberdog does not usually show a very voracious appetite and it is common for families to encounter some difficulties for the puppy to eat the corresponding dose. It is not that they do not like their food, rather that what is around them is more interesting, such as toys or attention. Generally, the first days of adaptation to the new home they do not usually eat much. It is not worrying if they do not finish a whole feed or decide not to eat in one of the 3 meals, but if it becomes common or if several meals go by without eating, we should encourage them to eat their feed.

The same formula does not apply to all puppies:

In general, if more than a day goes by and the puppy has not eaten anything even inciting him, it would be advisable to take him to the vet, as it may be a sign that something is wrong and a check up is advisable. In this case, we recommend saving a sample of their feces to take to the vet, as it can be very useful to rule out possible digestive problems.