THE LABRADOODLE IS NOT A BREED

A purebred dog needs to have some constant characteristics

There is no consensus among breeders about the standard that this dog should have.
This makes it difficult to be able to predict how a Labradoodle will turn out, since breeding criteria is very different among breeders.

IS IT IMPORTANT FOR A DOG TO BE PUREBREED?

It is important for a dog to belong to a breed if you are looking for specific characteristics in that dog. A purebreed dog means that it has stable genetics and that it has the general characteristics specific to the breed. This ensures, for the most part, being able to predict its personality, appearance, needs, and ultimately, the relationship you will have with it. Since the Labradoodle is not a purebreed dog, it is difficult to predict its qualities. Are you looking for a hypoallergenic dog with great potential to become a highly affectionate therapy or assistance dog? Then the Labradoodle is not the best option. .

WHY WILL THE LABRADOODLE NEVER BE A PURE BREED?

The evolution of the Labradoodle has been tortuous. The creator of the Labradoodle Was criticized and unable to register it as a purebreed. It became popular, and individuals without knowledge began to reproduce Labradoodles. The dogs soon began to lose the very characteristics for which the breed had been developed (hypoallergenic dogs with an even temperament). Furthermore, as no unique standard existed, breeding led to dogs that were not sufficiently homogenous to be classified as a breed. Confusion and a lack of professionalism pervade the history of the Labradoodle, which is why no institution will accept the name “Labradoodle” for registration as a purebreed. 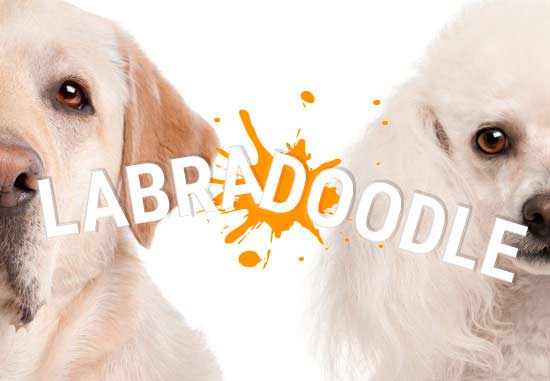 The name comes from the combination of the names Labrador and Poodle. The name references the cross of these two breeds, conducted by Wally Conron to create a dog with an even temperament that could serve as a guide dog, and that was also hypoallergenic. The fact that the name "Labradoodle" refers to this cross is not very compatible with the idea of registering it as the name for a pure breed, which is composed of two other dog breeds. It is incongruent and no institution could ever accept it as the name of a purebreed.

WHAT MAKES A PUREBREED DOG?

ITS OWN DNA SEQUENCE

Dogs have their own DNA sequence which is maintained stable over the generations. This is what ensures that the characteristics of the breed are maintained in each litter, and what enables us to talk about predictable aspects of future puppies. The Labradoodle doesn't have its own DNA sequence that is repeated in parents and babies, but the Australian Cobberdog does.

A breed's standard establishes the ideal breed and serves as a reference for breeders when it comes time for breeders to select dogs for breeding. It is important to have only one standard for a breed, so that all breeders can work the same way, achieving the same objective. With Labradoodle, there is no unique standard for the breed, which means that the dogs are not very homogeneous.

When establishing a breed, it is important to know the ascendency of the dogs in order to control possible hereditary problems in future descendents, to ensure that they meet breed standards, and to effectively certify that the parents are purebreed. With Australian Cobberdogs, there is a single registry for dogs used for breeding, which does not occur with the Labradoodle.

An infusion refers to when a breeding programme includes mounting with another breed so that it can strengthen or eliminate a specific aspect. In order to avoid breed deviations, it is necessary to have an institution, such as the MDBA in the case of the Australian Cobberdog, to control this practice by providing prior approval of the infusion and guaranteeing that the breeding programme stays loyal to the breed objective.

A MINIMUM NUMBER OF GENERATIONS

In addition to guaranteeing that it belongs to a specific breed, the pedigree of a dog also certifies its geneology, indicating who its anscestors are. This helps us to know its genetic lineage, and also confirms that it was bred under the specific criteria that the document-issuing institution imposes on all of its members.

THE AUSTRALIAN COBBERDOG IS THE PUREBRED LABRADOODLE

The Labradoodle was created by Wally Conron to be a hypoallergenic dog with a suitable temperament for therapy and assistance work. However, as it grew in popularity, many breeders began to breed it without following these criteria. This gave way to dogs which were more nervous, difficult to train and often non-hypoallergenic. In addition, many new Labradoodle clubs and associations came about with their own norms and standards. This increased the confusion surrounding these dogs. The Australian Cobberdog  breeding program was established for this reason, to bring the Labradoodle back to what it should have been: the only hypoallergenic assistance and therapy dog. This means that the single breeding standard for the dogs is guaranteed by the MBDA, the Australian institution responsible for registration of the Australian Cobberdog.

THE AUSTRALIAN COBBERDOG IS A PUREBRED LABRADOODLE

The Australian Cobberdog is a purebred which is recognized by the MDBA (the international registry for purebreed dogs) since January of 2012, and it has its own DNA sequence. The MBDA is also the institution responsible for ensuring that breeding procedures have been carried out correctly, in order to ensure the quality of life of future generations of a breed through the good practice of the breeder, whose criteria must be a good personality and good health in the puppies. Only breeders registered with the MDBA have the authority to guarantee that their dogs are purebred Australian Cobberdogs, which in turn guarantees the quality of their dogs.